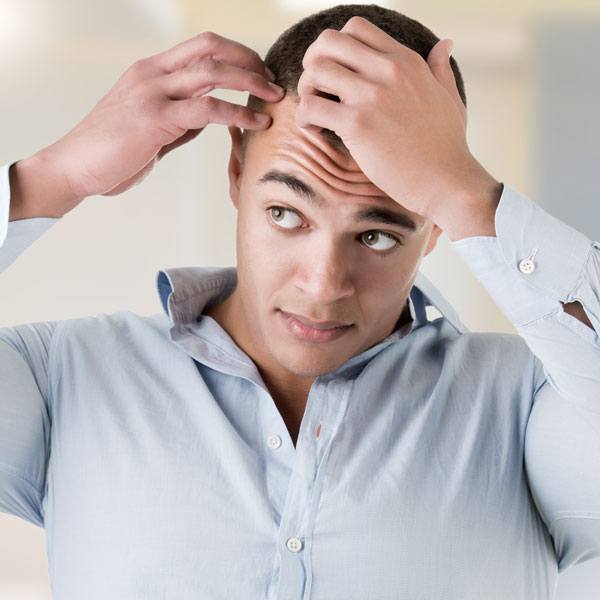 “Alopecia” simply means “hair loss”. The most common type is androgenic alopecia, which means hair loss caused by androgens, or hormones. Traction alopecia means hair loss caused by traction, or pulling force being applied to the hair. It is primarily caused by anything that applies constant pressure on the hair such as tight braids and ponytails, wearing weaves or extensions, and even occasionally from frequently wearing barrettes.

Traction alopecia is most noticeably found in the frontal hairline and is characterized by hair loss with what looks like sparse hair coverage in that area. The constant tension will either pull the root of the hair out completely or will cause the follicle itself to become inflamed and eventually lead to the follicles being so damaged that they will end up atrophied and therefore useless because they can no longer create new hair strands.

We see this form of alopecia a lot in African-American females or in the Sikh culture because of the tendency to wear very tight braids constantly. However, it can be found in any culture and anyone male or female who prefers to wear their hair in ponytails or wear extensions or weaves, etc. If you are constantly doing anything that is putting your hair under some form of strain, no matter how much or for how long, then you run the risk of having hair loss caused by traction alopecia. Serious cases of traction alopecia have even been found in young girls, and all the recommendations apply to preventing hair loss in our kids.

Here are some early signals that you might have the beginnings of traction alopecia and need to listen to your body sending you warning signs:

– The area is sensitive or sore after you take out a braid or ponytail.
– You get a sense of relief when you remove strain on your hair.
– You get a headache from wearing your hair a certain way.
– Your scalp itches after you have a weave or extensions in.
– Some people will notice red bumps that can even have pus in them because of the irritation to the scalp.

A late warning sign is permanent hair loss. If you have felt any of the above signs for any of these reasons, then you need to stop applying strain to these areas and even seek out the advice of a hair restoration specialist so that a plan can be made to minimize the long-term damage.

A hair transplant is possible to replace lost hairs, but it can become harder at later stages because of the scarring that can occur from long term tension on the scalp. So instead of waiting too long, here are some suggestions on how to avoid traction alopecia while still being able to wear your hair in a certain style.

– Use a wide, fabric hairband to hold your hair back instead of putting it in a tight ponytail.
– Loosely braid your hair. You should be able to get your finger under the base of a braid.
– Avoid using clip-in ponytails. They will literally tear out your hair.
– Invest in specialized hair extensions and get them done by a professional.
– Change the location of ponytails and switch out braids at least every few months.
– Something as simple as changing where you part your hair every day can make a big difference.